Every person on two wheels has heard a helmet myth at some point in their life, or they’re going to. Riders, it seems, naturally can’t help spreading a little “wisdom” to other riders whether they’ve asked for it or not. But how do we separate the truth from the “stretched truth,” and the fact from the fiction?

Go ahead and strap on your helmets folks, because hard-hitting truths are coming up fast in your rearview mirror with this piece. Some of these may shock you, some might be new to you, and some you might even disagree with (let us know in the comment section or on our Facebook page!). Regardless of how you feel, the time has come to separate motorcycle facts from motorcycle myths.

Below are the 12 most common motorcycle myths we’ve heard over the years. Some are fairly new, while others were being passed down by word of mouth long before bad information became readily available on the internet.

We’re likely going to upset a few riders with this one, but here at Ride Vision we take motorcycle safety extremely seriously — which is why we decided to bust this myth first.

Did you know that the DOT has required a minimum of 210 degrees of visibility for any legal road-going helmet sold since 1997? The laws are so stringent that there are actually significant fines for any helmet manufacturer that fails to meet this standard.

Why is this important? Well, it just so happens that the average maximum human field of peripheral vision is no greater than 180 degrees.

That means that unless you’re a part owl, these helmets aren’t restricting your view. In fact, the wind and debris protection from helmets actually serve to enhance your vision – as you’re not constantly dodging bugs or wiping away high-wind tears.

Combine that with the fact that you should have: (a) two mirrors on your bike assisting peripheral vision and (b) you should be moving your head to check your blindspots with or without a helmet anyways and there’s absolutely no reason to think that a motorcycle helmet impedes safety, visual or otherwise.

Sadly this is another popular myth from the anti-helmet crowd. This one was debunked over a decade ago, but you’ll still hear it from time to time coming from anti-helmet law advocates.

All politics aside, Johns Hopkins University published a study in 2011 that found riders wearing helmets were actually 22% less likely to suffer a spinal injury in the event of a crash. Even long before that, this myth has been proven false again, and again, and again, by dozens of peer-reviewed medical studies, yet it’s still somehow prevalent within the riding community.

If you don’t think helmets should be mandatory, you’re welcome to state your case, but please: Don’t make it about motorcycle safety.

To put it bluntly: No, they don’t.

And there’s nothing wrong with that. The problem comes when you start relying on those cool pipes to serve as a safety feature.

Just this year, a study conducted in Romania had six different motorcycles literally hit their rev limiters from just behind a parked car and even the most obnoxious pipes weren’t getting anyone’s attention. You can check out their testing methods here, but if you still believe that your big open exhaust is a safety feature (or cool, for that matter), you’re sadly mistaken.

This is further evidence that when it comes to motorcycling safety, nothing beats good training, gear, and riding habits.

4. Laying The Bike Down “For Safety”

As far as motorcycle myths go, this one isn’t quite as cut and dry.

We’ve seen a few good examples of riders sliding both themselves and a bike underneath closed gates or checkpoints because they clearly didn’t have enough time to slow down. Admittedly, they avoided the obstacle… by causing themselves to crash.

And why did they cause themselves to crash? Because they were likely either riding beyond their limits, or they weren’t paying attention to the road.

99% of the time “laying the bike down” is the wrong choice. Not only because you’re directly putting yourself in a dangerous situation, but also because it’s one you have absolutely no control over.

Once that bike is down and your wheels have left the pavement you have no idea where or what you’re going to slide into, or if you’ll even slide at all (plenty of footage out there of bikes tumbling head over heels with their owners underneath). 99% of the time, a well-practiced emergency brake or swerve maneuver is a MUCH safer option.

It’s natural to be wary of new computer-controlled rider aides for the same reason you should be cautious anytime you throw a leg over a new motorcycle: it’s foreign to you, and you don’t have a feel for how it works.

With that being said, if you haven’t experienced modern motorcycle ABS, let us tell you: It is nothing short of shocking how hard you’ll be able to apply the brakes without breaking tire traction.

ABS braking technology has been around for years. Originally developed in the 1960s, this lifesaving technology is now used in everything from touring motorcycles to the world’s most advanced race bikes.

Combine that with the fact that the Insurance Institute for Highway Safety found that crashes are 31% less likely to be fatal (and accident claims are 20% lower) when a motorcycle is equipped with ABS.

6. Don’t Use Your Front Brakes Unless You Have To

As safety fanatics, we can’t believe we’ve even heard this one… Sadly though, it’s way more common than you might think.

This myth probably came about through a misunderstanding during basic motorcycle training courses. 70% of any motorcycle’s braking power resides within the front brake. That’s the majority of your stopping power, and stop is exactly what it does. Those two pads are capable of halting thousands of pounds of momentum with just a squeeze of your hand, and admittedly that can be pretty scary.

In fact, the front brake CAN be downright dangerous when used in the wrong situations.

A rider should NEVER apply their front brake while their handlebars are turned. This will cause the bike to pitch forward and to the side that the bike is turned. Do this at speed and you’ll be on the ground faster than you can blink.

“Stabbing” or “jabbing” the front brake can also cause front tire lockup, suspension upset, or even endos. Any brake application should always be smooth and controlled.

In short — the front brake is absolutely essential, but so is the training to properly use it.

7. All Riding Gear Is Hot/Uncomfortable

Fortunately for riders all over the world there are a LOT of fantastic gear alternatives specifically designed for riding in hot weather and summer months. There are cool suits, cooling scarves, cooling under armor, vented options, and even ceramic-infused “super fabric” in some gear now that’s four times as abrasion-resistant as full-grain leather.

It’s also worth noting that sitting in traffic on top of a hot motorcycle in any full safety gear is likely going pretty uncomfortable, but sitting in a hospital bed covered in road rash is about 1000x worse. Choose wisely.

This one is absolutely true… if you’re on a racetrack.

And you know how to use them.

And that racetrack is dry.

And you had your bike sitting on properly calibrated tire warmers right up until you left the pits.

For literally anyone else, this one falls under the category of very dangerous motorcycle myth.

Though they may look cool, racing slicks have no place on public roads. They require a LOT of heat to maintain grip, and a LOT of heat requires a LOT of constant speed, constant lean in both directions, and constant aggressive braking. They also don’t do well on any amount of gravel, debris, dust, or moisture (all things you’re very likely if not guaranteed to find on public roads).

Even in the fastest, driest, and cleanest canyons, you’re going to do better with a street-legal sport or hypersport tire than a racing slick.

If you’re commuting, joyriding, or doing any kind of riding that involves any potential for inclement weather, sport or sport-touring tires are both the safest and best-performing tread compound for your bike.

Though the intentions behind this myth are probably good, it’s not necessarily true.

CE ratings, construction methods, and quality materials are the only thing that makes gear better, the rest is frankly gadgetry and marketing (not that there’s anything wrong with that!).

For example, an ECE 22.05 DOT rated helmet can run you $100, or $600 depending on the brand of the stickers covering it. Both are rated up to race quality, and both will provide fantastic protection. The rest comes down to budgeting and personal preference.

Something to keep in mind too while considering what type of motorcycle safety gear to buy is age. A used Ducati jacket with the CE armor still attached might be a great buy, but that used AGV helmet (though half the price) is a dangerous pick.

10. Cars Cause Most Accidents

Of the remaining 60%, rider skill, speeding, and alcohol usage are all common causes of accidents involving a motorcycle and another vehicle.

Yes, drivers contribute their fair share. And yes, most of us can tell at least one story of someone on their cell phone running them off the road. But, as you’ll read below, drivers are actually at a surprising disadvantage when it comes to seeing motorcycles on the road.

Without a doubt, there are a few drivers out there that just don’t like motorcycle riders (we’ll attribute that to envy). However, there’s a much more interesting reason why so many drivers don’t seem to see riders — they literally don’t see motorcycles.

A study conducted in 2019 by the Australian College Of Road Safety found that even when your motorcycle is directly in a driver’s line of vision, their brains may fail to “perceive” you as a vehicle (or a person, for that matter).

Motorcycle myths sprout from this strange phenomenon (called “Inattentional Blindness”), which causes drivers to fail to react to motorcycles everywhere from busy intersections to fast-moving freeways.

Thankfully, aftermarket technology like the Ride Vision motorcycle early warning system is now available, which allows you to prevent accidents before they happen, whether a driver cares about you or not. 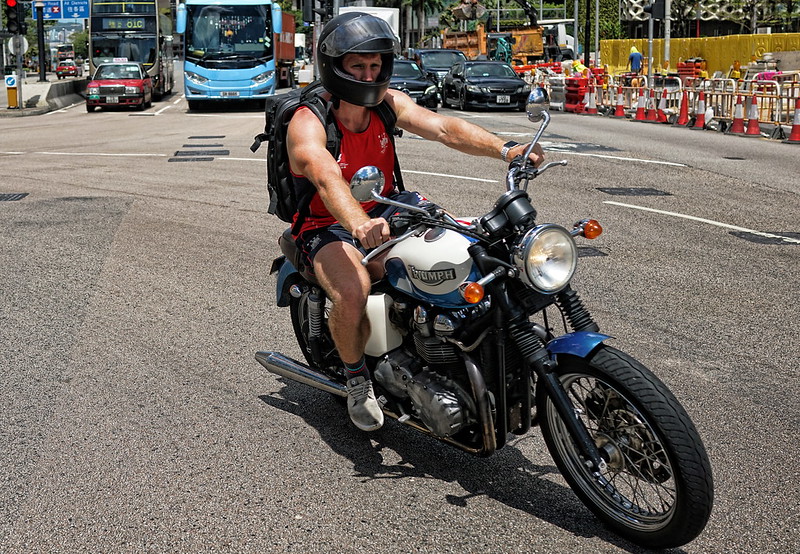 And that’s ok. We ride motorcycles for the thrill, and for the passion, and every rider who swings a leg over the saddle before each SHOULD understand that there’s a degree of risk involved. It’s part of what (should) drive us to be serious about safety.

So as far as motorcycle myths go, you just can’t afford to believe this one.

Though they make for good stories, motorcycle myths are and should remain just that, myths.

Having bad information or sharing common misconceptions about motorcycles as fact can be a serious safety hazard.

And admittedly, we might be a little biased (or obsessed) when it comes to motorcycling safety – but we believe that good gear, training, and a quality collision-avoidance system like Ride Vision 1 will give you the head start you need to stay safe and have fun out there.